I spent yesterday at the zoo.  This year my team teacher got the grade threes into zoo school.  Yesterday was the mandatory teacher orientation.  I was hoping to come out of the day with a plan and some ideas of how I'll use this to benefit the kids.  I left not knowing much more than when I walked in.  While I don't want to be a negative nelly the zoo is something I have very mixed feelings about.  On one hand I understand it's mandate is to conserve and educate.  On the other hand I look at all these animals in cages and artificial spaces and feel sad.  The sad truth is these animals still have better lives than most people's pets.  They receive high quality and nutritionally balanced food.  They get exercise and attention (zoo keepers are with them a minimum of 12 hours).  They get mental stimulation (called enrichment activities.)  Either way, in October I'll be sucking it up and spending five full days at the zoo.
Posted by Country Girl at 8:58 AM 1 comment:

Sitting on a couch watching a cooking show, thinking I was going to start making my pizza dinner soon, I giggled as Diva batted around her newest favorite toy.  And then it happened.  Diva wandered over to the corner looking curious.  She kind of batted at the corner and then jumped back.  Focusing, I looked.  And promptly screamed like a girl.   There was an ant explosion.  They were pouring out of my corner like something from a horror show.  Freaking out I hopped off the couch, danced around before herding the dogs out of the room.  Grabbing my keys, I tossed the dogs into their respective places in the garage before bolting out with my truck.  Frenzied I drove into town to the nearest greenhouse where I loaded up on ant killer sprays and powders.  Next stop was the grocery store for some ant traps.  Eighty dollars later I left town.

Doing the heebie jeebie dance I shuddered as I read the instructions while keeping a close eye on the mass of ants in the corner of my house.  Traps set down.  Dr. Doom sprayed into the crack and the ants began a mass exodus.  Eyes wide I watched them clear out en masse.  A friend suggested I check my basement.  Down the stairs I go, into the room directly below where another mini freak out ensued.  Eeeew!  They had just dropped a level.  Zipping back up I grabbed my spray, climbed a ladder and began spraying.  Out to the garage I went to drop traps. (I didn't want to spray in there because that's where the dogs hang out.)  Along the edge of the house I applied poison powder stuff.  By the time I got back into the house the ants were gone.  Completely gone.  Weird.

Throughout the evening I did perimeter checks looking for any signs of the invaders.  Nothing.  I found one little lingerer which I quickly dispatched with a Kleenex.  Friggen' creepy.

To give you an idea of the volume of ants, this picture shows about 1/3 -1/2 the amount of ants - after I'd begun treating and they'd begun vacating.  *shudder* 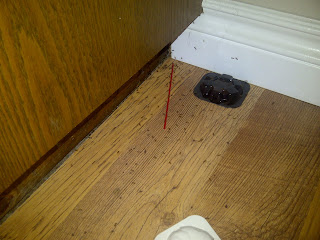 Yesterday was the big "N" day for Ryder.  I dropped him off at the vet at 7:30 am.  Even though I know this is a routine and relatively safe thing to do, I did what I do best.  Worry.  And when I worry I often bake.  So I binge baked.  I made chocolate zucchini cupcakes, cheese scones, cinnamon buns, and chocolate chip cookies.  Let's just say I had a belly ache last night. 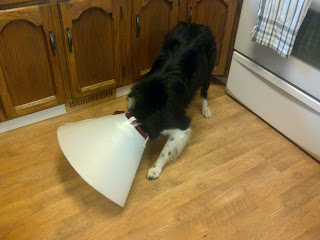 When Ryder came home I was instructed to ensure he wore his "cone head".  He freaked.  I've never seen a dog have such an extreme reaction to wearing the cone of shame.  He was body slamming into walls.  Leaping into the air backwards.  I became very concerned he'd hurt himself.  Grabbing a hold of him I sat on the floor beside him trying to calm him.  When 45 minutes had passed and he wasn't giving up the freak out I cratered.  Pulling the cone off of him I decided to just keep an eye on him.  Like the good little boy he is he just settled down and went to sleep.

When it came time to go to bed I was in a bit of a quandary.  What to do?  Deciding to take another crack at the cone, I shoved it on his head, and man handled him backwards into his crate.  I figured he wouldn't be able to move around enough to do himself any damage.  Climbing into my own bed I talked to him as he body slammed the side of the crate, jerking forward to smash his face into the mesh door where he made Darth Vader sounds.  Drifting off I listened to this routine.  I listened to it for over an hour before I gave up.  He was not settling down.  Letting him out I pulled off the cone.  He skittered to his sleeping spot between my bed and the wall.  Blocking my door so he was stuck in my room (so I could monitor him) I once again went back to sleep.  I woke when I heard slurping sounds.  Telling him "no" seemed to work.  Throughout the night he only needed a couple of prompts to leave his ouchie alone.

While I realize he's supposed to wear the cone for 7 days, I've quite given up on it.  He woke up bright and cheerful this morning.  In fact, I even took him for a short run with me.  I was careful and watched him closely for any signs of discomfort.  If anything I'm spending more time trying to keep him from running around or trying to play with Diva.  It's going to be a long few days as I try to keep my Border Collie from being active.  Wish me luck, I may need it.
Posted by Country Girl at 4:01 PM 1 comment:

Two years ago, (on the 15th), Reba had a litter of seven adorable pups.  Today we celebrated by going on a hike with some litter mates.  (We had to celebrate early as Ryder will be unable to "hike" on his actual birthday as he'll be recovering from his neuter.)  Such gorgeous dogs! 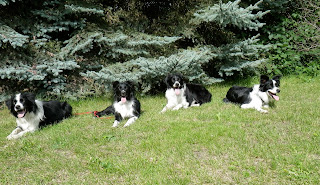 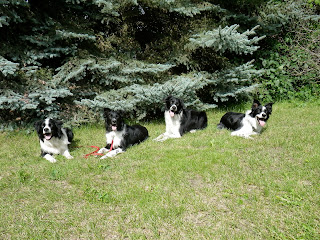 It was great fun watching them run and play.  I'm looking forward to seeing what these dogs accomplish as they mature.

Ryder, Diva and I went on a jaunt up north today.  We went to Lisa Wright's place.  I had decided to take a lesson from her.  She's been relatively successful on the trial field and has trained dogs for many years.  I was able to get some insight and ideas for Ryder as well as link it back to things I'm doing.  He worked not too bad.  In fact, he was a pretty good boy.  We chatted in general about dogs, Border Collies and training.

I had been pondering neutering Ryder for a good portion of the summer.  Today I made a decision.  I've decided I'm going to do it.  Simply because it will make both his and my life easier.  I have very little interest in breeding dogs.  There are many, many very nice and well bred Border's out there to pick from.  I'll aim for a late August date.

Just because I'm slightly twisted I decided to have some fun with the horses today.  I saddled and lunged Johnnie.  He was pretty good if a bit bug eyed.  Next I eye balled Guinness.  Guinness is only a yearling so too young for training or riding.  However,  the curious person inside of me wanted to see what my beefy baby would do with a saddle.  I figure I might as well test this out while he's still small enough for me to keep under somewhat control.  So I saddled Guinness.  All appropriately and slowly as fitting a baby.

He was surprisingly good.  He only got broncy after he'd been leaned on.  I think he didn't like the feel of the saddle on him with the added weight.  Boy can he buck!  He even made those nasty grunting groaning noises you usually only hear rodeo broncs make.  After his episode he calmed right down and I was able to walk and trot him around.  I'm very happy with how his mind works.  For the most part he was calm and accepting of everything that happened.

I had a super summer day at Ken's.  I arrived bright and early with the three hounds, ready to work.  Diva decided it was a great day to be a shit.  She snarked at Ken's daughter.  This meant work.  Work, work, work.  I spent quite a bit of time trying to get her to relax and let go.  She remained tense but mannerly.  Poor Ryder had a rude awakening.  We went and worked out in the hay field.  (Think 100 acres.)  Ken and I worked off each other.  I'd hold the sheep and he'd send his dog on an outrun.  And we'd switch.  Ryder was absolutely freaked by this.  He initially brought the sheep to Ken.  The next time he crashed the side.  With work I was able to get him to collect them cleanly and bring them to me.  He's still not very confident about it.  This will be something to continue to work on before any field trials.  Ken thought his drive was coming along very nicely.  We're still not really trial ready but we're  going because he's such a wimpo he needs to be exposed to as much as I can get him to.

I had Ken work Charlie.  Charlie was his pushy self but worked pretty nice for a young dog.  Ken was impressed.  It's a shame he doesn't have the right qualities to "fit" Blaine but I won't send him a dog that's not perfect for him.  I'll be calling some of my trainer friends to see if they'd be interested in a cattle/ranch prospect.  I don't have time come September so the quicker he goes the better it is for both of us.  In the meantime I'll continue to work on basic obedience with him.

Ken rode a couple of horses.  One was the gelding that I had for part of the winter and the other was a mare I love.  She was injured in a wire accident.  Cut open her hock badly.  It's really sad because she's an outstanding mare but won't be performance sound.  (Likely not.)  Well bred (Playgun, Sonitas Last) with a great disposition.

I had a great day and came home with some tired dogs.  What more can a girl ask for?
Posted by Country Girl at 1:26 PM 1 comment:

It was time to man up.  Time to take the Ryder boy to his first trial.  He's not really ready.  He's a bit unsure (make that quite a bit) on his commands.  He doesn't cross drive yet.  But I have 11 days to fine tune him before he debuts in his first trial.  He'll be competing in the Lloydminister Stock Dog Trial on August 12th.  It's a relaxed arena trial that I think will be a good first experience for him.   I certainly don't expect him to do anything.  In fact, I'm fully prepared to walk off the post to help him out.

Because I was feeling nostalgic, I've also entered Tessa.  She's been quite sane, and it's only an arena trial.  I'll do a few little tune up works with her prior to but will work her very little.  I don't want to risk hurting her.

A little bit of old and new for a fun weekend.
Posted by Country Girl at 3:08 PM 3 comments: 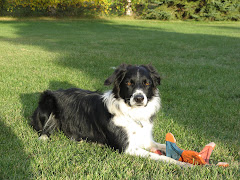 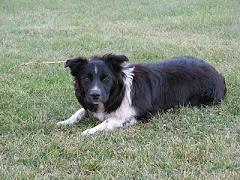 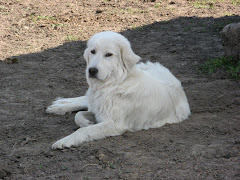 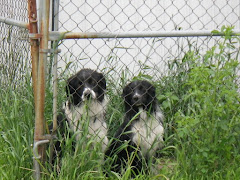 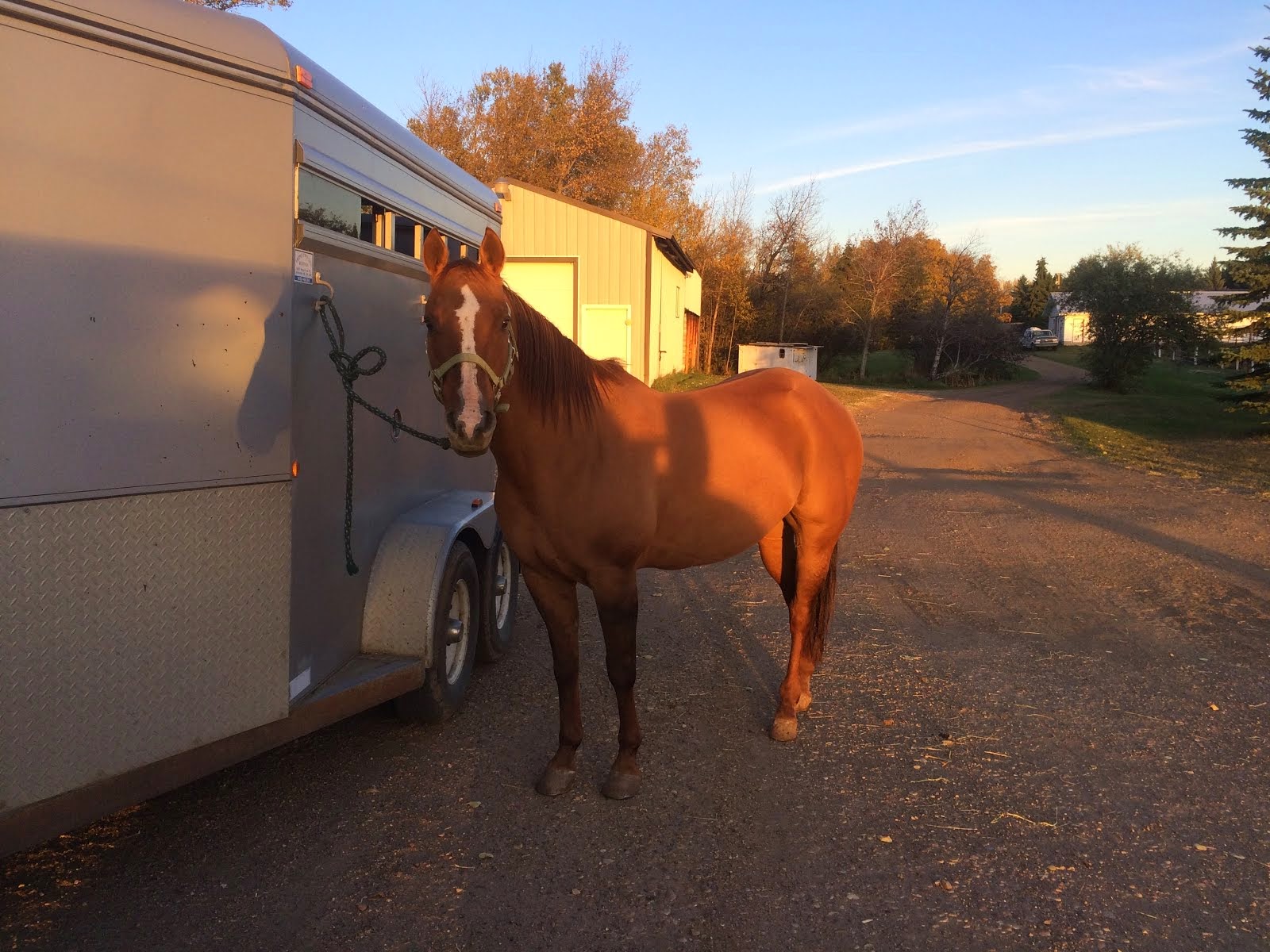 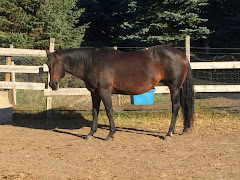 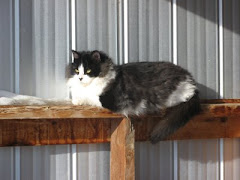